Over the past 25 years, the village of Monte Castello di Vibio has hosted some of the most well recognized professional art schools, colleges, and universities in the world.

For colleges, universities and secondary schools—a history of excellence.

At the International Center for the Arts, we can host more than 30 students at a time in comfortable, secure, historic accommodations. We provide classroom options including the Teatro Concordia or our Common Room, equipped with audio visual equipment, high–speed internet, and an extensive digital image library for lectures. Our spacious studio classrooms are furnished with easels and large tables, have beautiful natural light, and ample exhibition/critique space. We provide field trips and excursions to points of interest throughout Italy, using our transportation partner, Provenzani charter bus lines. The ICA staff provides continuous bilingual on site-support to students and faculty. With over twenty-five years of experience in Italy, we are also able to provide insightful and comprehensive educational excursion recommendations upon request. 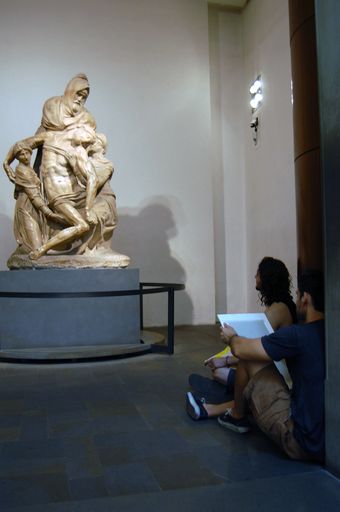 Monte Castello is safe and accessible for students of any age. Atop a mountain, uniquely self-contained within its medieval walls, and nearly free of any vehicular traffic, students are free to wander its stone streets any time of the day or night. It is impossible to get lost and violent crime is unknown. Medical facilities with doctors are accessible throughout the day in Monte Castello and two hospitals are twenty to thirty minutes away in the cities of Pantalla and Marsciano.
Located near the exact center of Italy, ICA is one hour and thirty minutes north of Rome and two-hours south of Florence. The cultural sites of central Italy are reasonable day-trips from Monte Castello and pick up at the international airport in Rome is simple. Public transportation is also available at Pian di Porto at the base of the mountain, with easy, regular bus service at to Perugia and to Rome. Students and faculty are thus able to make day trips to Rome via the Sulga Bus service there, departing in the morning at approximately 8:30 and departing Rome at approximately 5 pm, arriving in time for dinner. 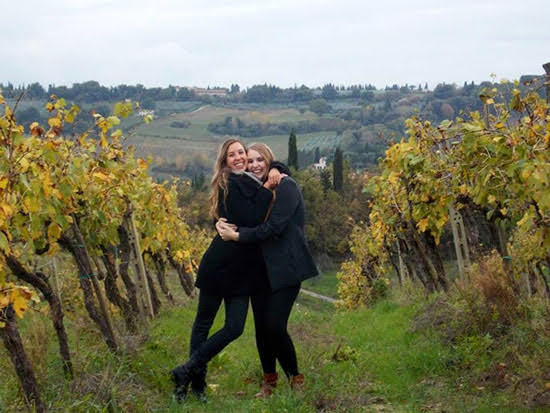 Monte Castello is a quiet place that nonetheless reflects the vitality of Italy. With lively festivals and traditional customs existing side by side with contemporary art exhibits, concerts and local sports events, it seems to exist in a world both past and present. There are two grocery stores, a pharmacy, a public use soccer field, and a gourmet restaurant that features local delicacies and wines.

A café bar in the central piazza serves and coffee light breakfast foods as well as sandwiches and beverages. Another, La Toraccia, as it is called, due to its location below the castle tower along the edge of the medieval wall, forms a community gathering place in the summer. Featuring live music and a wood-fired pizza oven, it provides a distinctive cultural experience for students, where they can dance, enjoy a gelato, and mix with the community under the watchful eyes of resident nonne (grandmothers).
View All Amenities »

Students are provided with double occupancy rooms in apartment settings in town or in the main building, where participants have private, dormitory-style accommodations in a former convent. Single rooms outside the convent are available for an additional fee.

Program participants will have a wonderful introduction to traditional Umbrian cuisine, with meals prepared in our kitchen on site from the freshest ingredients––after all, Umbria is called “the green heart of Italy”! Except for field trip days, participants will enjoy three generous meals every day, all lovingly prepared by our cook. Daytime meals are served in our common space, where students, faculty and residents interact over stimulating mealtime discussions, while dinner is served on an outdoor terrace overlooking the beautiful Tiber valley.

We provide classroom space for the appropriate times and days of your class meetings. Spaces for art classes will be equipped with easels, tables, drawing boards, or projection equipment according to your needs. Lecture classrooms will be equipped with AV equipment as needed, high-speed internet, Wi-fi and access to our extensive digital image library. Program participants in the visual arts can be provided private or semi-private studio space in the medieval buildings around the village upon request.

One Field Trip Per Week

Each week of the program, field trips are scheduled to extraordinary destinations around Umbria and Tuscany. In the course of any given three-week session, scheduled trips always include Rome and Florence. Other destinations are scheduled in advance to nearby locations such as Siena, Arezzo, Orvieto, and Assisi. See Calendar (5) for this year’s schedule of field trips. We also offer additional, topical guided trips upon request for an additional fee. See: Additional Trip and Tour Options (6) for more information.

Our Study Abroad programs require enrollment of six or more. We arrange our services and facilities according to your needs. Contact us directly for specific price quotations. All programs will include accommodations, meals, transportation, classroom and/or studio space and onsite support. Meals, accommodation and studio/work space are provided at no cost for an accompanying faculty member/group leader. Prices and arrangements for additional faculty members and/or staff members sent by the institution are available upon request.
Are you an institution or faculty member interested in hosting a study abroad program in Italy?
Build your trip from one of our sample itineraries, created from our years of programming experience, or work with us to develop your own retreat from the ground up. The first step is to contact us with the type of retreat you’d like to take and we’ll work from there!
Contact us to get started » 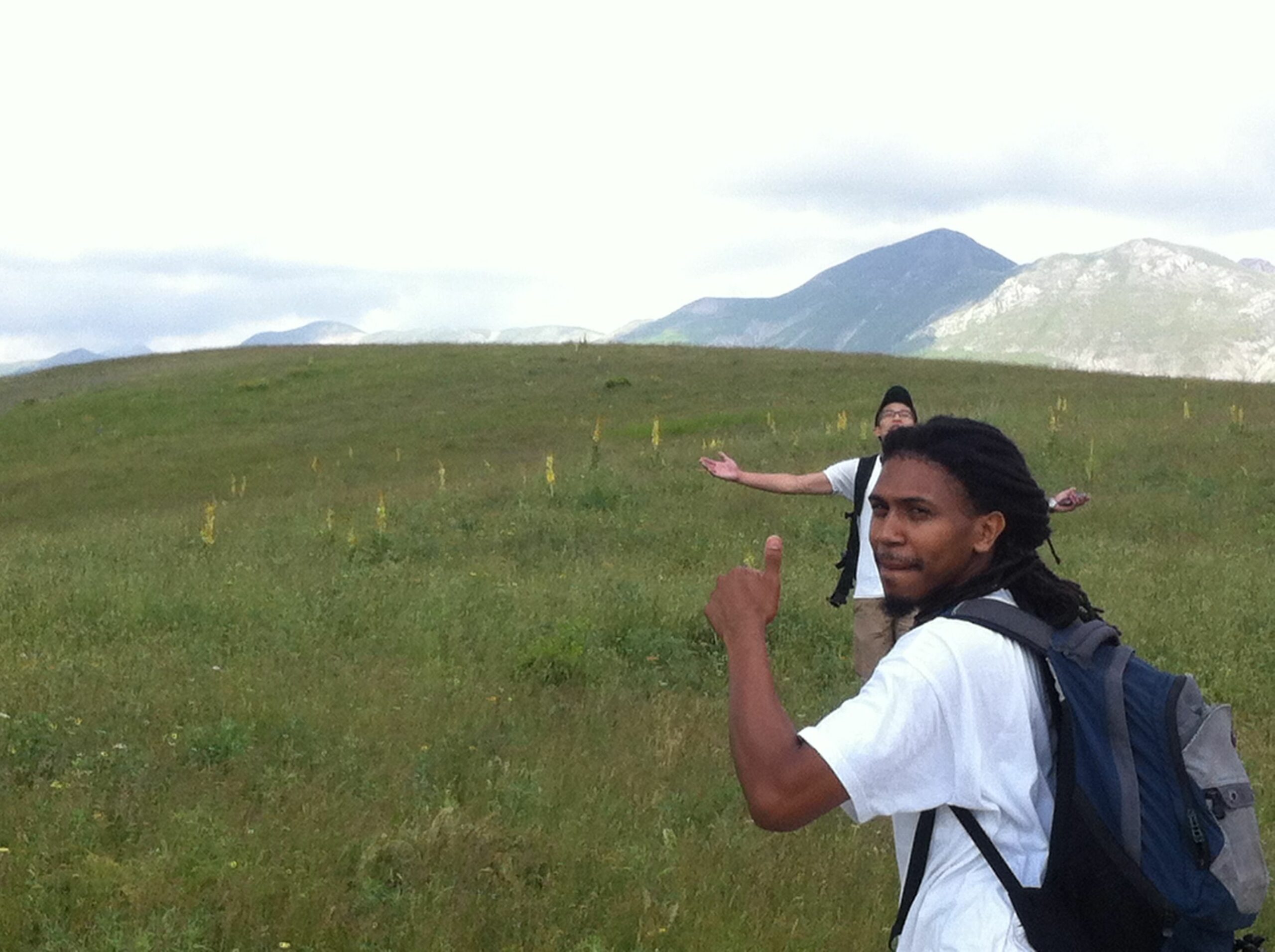 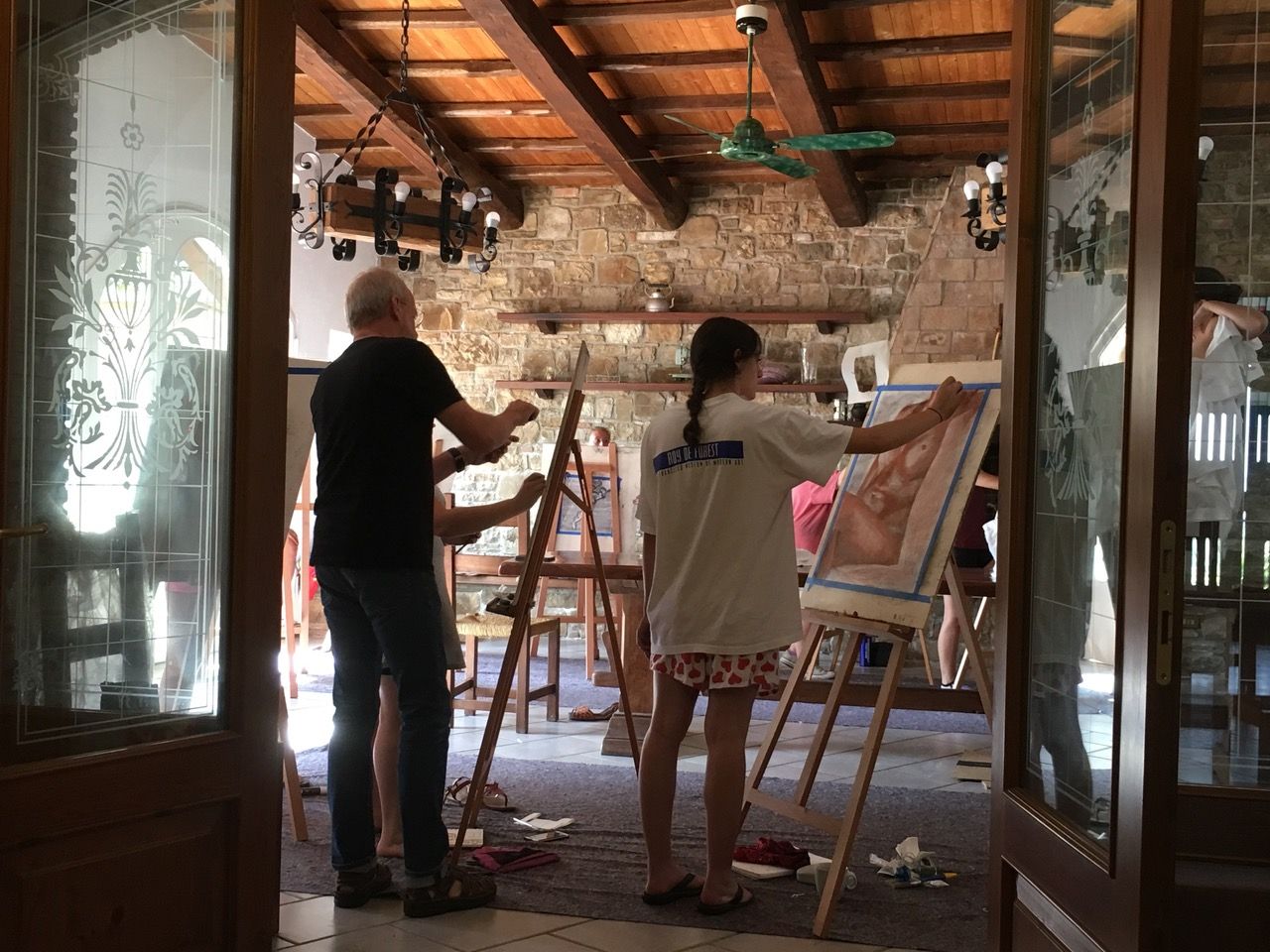 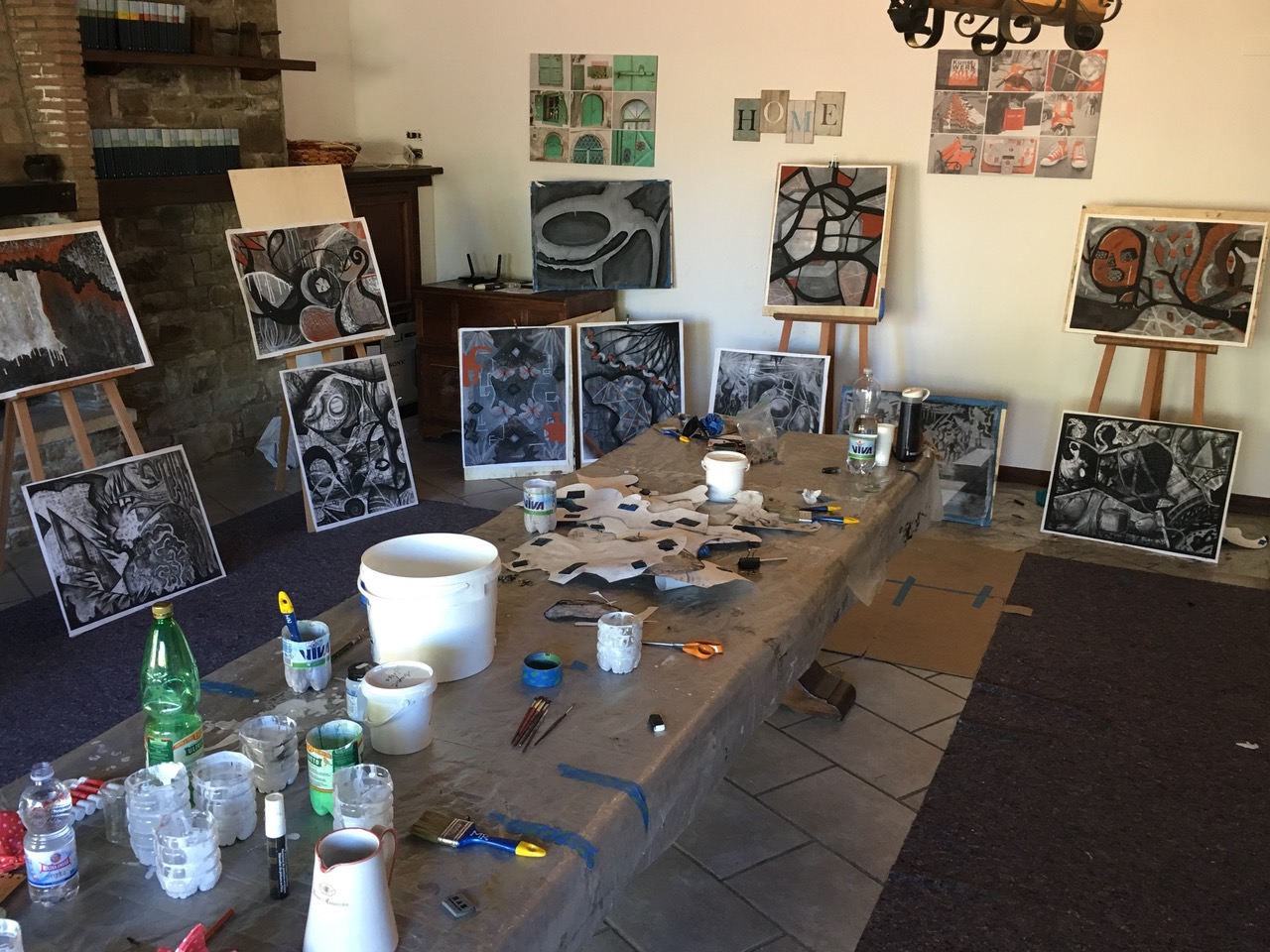 Monte Castello is a traditional village. With fewer than 2000 inhabitants, including those living outside of the village in the surrounding countryside, the rhythm of daily life in Monte Castello goes on as it has for generations. The people of Monte Castello are friendly and helpful to students, and welcome them with open arms. It is a source of great civic pride that visitors come from all over the world to experience their little community. There is much in Monte Castello to interest visitors––with mountaintop cities such as Todi or Assisi perched nearby, panoramas of the of the Tiber River Valley and glimpses of the snowcapped Sybillini mountains in the distance, visitors have spectacular 360 degree views from any point in the town.
The city itself was built over the course of numerous civilizations. It is believed that the foundations of the village are Etruscan, and architectural remnants of their presence are still found in the soils around the village. The name itself bears witness to Roman civilization, (the "gens Vibia" family), as does the ancient bridge that crosses the Tiber below. The town one sees now however, is primarily Medieval and Renaissance, and in this, is almost perfectly preserved save for a few 18th c. additions, such as the lovely Teatro Concordia, the smallest theatre in Europe, which ICA uses for lectures and performances. 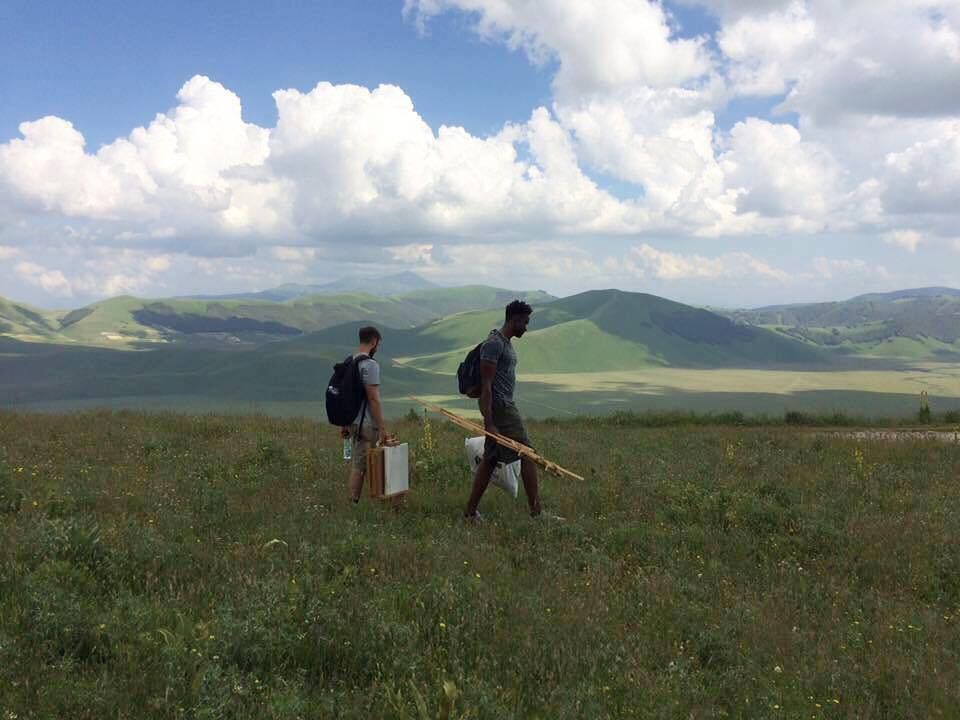 The Possibilities Are Endless

Since our inception and years of experience in building tours and workshops in Monte Castello and throughout Italy, we have put together some of the most unique and inspiring programs offered in the region. So whether it’s a tourist destination, artistic wonder or hidden local treasure that you’re after during your stay—we can accommodate your requests and have plenty of suggestions to offer.
Contact us »

Keep Up With ICA & Village of Monte Castello di Vibio

Enter your details to the right to receive updates about our upcoming retreats & workshop.